Kean University is the winner of an ALL IN Campus Democracy Challenge for having the most improved rate of student voting in the nation for a public university its size. 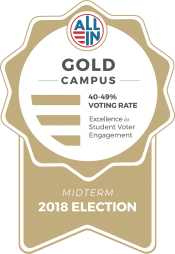 Kean was awarded a gold seal for a 27 point increase in the percentage of students who voted, based on data from the National Study of Learning, Voting, and Engagement (NSLVE), a Tufts University initiative. According to the data, the rate of voting by Kean students rose from 16 percent in the 2014 midterm election to 43.1 percent in the 2018 election.

“Voting is the foundation of a democracy,” said Kean President Dawood Farahi, Ph.D. “At Kean, we educate our students to be knowledgeable and engaged citizens of the world, and this is proof that they take their civic responsibility seriously. All of us at Kean are proud, and we will continue our efforts to encourage voter participation.”

Kean’s increase in student voting outpaced the national average from the 2014 midterm election to the 2018 midterm election. More than 1,000 institutions participated in the study, and according to NSLVE, students voter turnout overall increased by 21 points, from 19 percent to 40 percent.

“We are excited to honor Kean University with an ALL IN Challenge gold seal in recognition of its intentional efforts to increase democratic engagement and full voter participation,” said Jennifer Domagal-Goldman, executive director of the ALL IN Campus Democracy Challenge. “More institutions like Kean are institutionalizing nonpartisan democratic engagement efforts, resulting in the incredible student voter turnout rates that we’ve seen across the country.”

Kean actively encourages voter registration throughout the year, offering voter registration forms at offices and special events on its campuses. The University also holds peer advocacy drives in which students help other students register to vote and encourage them to vote on Election Day. NSLVE data shows a 76.2 percent voter registration rate for Kean students for the 2018 midterm election.

“We help register students to vote, but they are demonstrating their level of civic engagement by actually voting in greater numbers than students on other campuses,” said Scott Snowden, director of the Kean Center for Leadership and Service. “That is part of Kean’s message of community and service. We encourage our students to be fully involved in their communities and that means voting, volunteering, donating and giving back. We want them to make a difference in the world.”

Kean will highlight the importance of voting at the 13th Annual Human Rights Institute Conference, Vote: Human Rights in Action, which will focus on threats to voting rights across the country and the need to protect voter access and participation. The conference will be held March 27, 2020 at Wilkins Theatre on Kean’s Union campus.

“With everyone’s voice heard through their vote, we can come closer to having a government that represents the interests of most of the people most of the time,” said Susan R. Figueroa, managing assistant director for community service and civic engagement at Kean. “We cannot have any conversations on social justice and democratic values without purposeful and active participation in the democratic process.”

The ALL IN Campus Democracy Challenge is a nonpartisan, national initiative recognizing and supporting campuses as they work to increase nonpartisan democratic engagement and full student voter participation. The Challenge encourages higher education institutions to help students form the habits of active and informed citizenship, and make democratic participation a core value on their campuses.

More than 560 campuses, enrolling more than 6.2 million students, have joined the ALL IN Challenge since its launch in summer 2016.