Due to the forecast of strong storms across the region, the University will have an early dismissal today, Monday, May 16, at 3 p.m. at all Kean USA campuses. Offices will close at 3 p.m. No activities will take place after 3 p.m. Essential personnel should report to work as required. 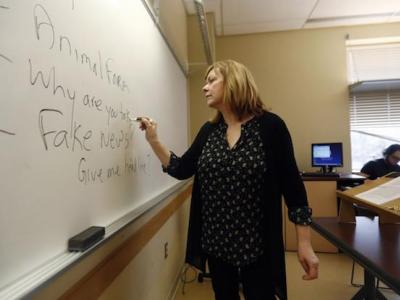 Pat Winters-Lauro joined Kean's faculty in September 2008, following a career in journalism that included positions as a reporter and columnist for the New York Daily News and a regular contributor for The New York Times. Her work has been reprinted in newspapers around the world from The Moscow Times to the International Herald Tribune. In 2003, Professor Lauro was awarded a mid-career fellowship at Columbia's Graduate School of Journalism, where she earned a certificate in Business and Economic Reporting. Professor Lauro holds a B.A. from Fordham University and a M.S. from Columbia. She has taught journalism courses at Rutgers University, Felician College and New York University, and is the faculty adviser for Kean’s award-winning student newspaper, The Tower.

School of Communication, Media and Journalism