The Kean students presented two of the only 17 undergraduate research posters selected for the conference, sharing the national stage with students from Stanford University, the University of Pennsylvania and New York University, among others.

“It was a terrific experience to be surrounded by many great minds in various disciplines of history, said Christopher Thoms-Bauer, a senior studying history with a secondary teacher certification. “It’s enjoyable to have experts learn from our work and give us feedback that we can implement in our future projects.”

Thoms-Bauer worked with fellow history majors Nicole Skalenko and Victor Bretones on The American Enlightenment in William Livingston's Library, exploring and detailing the impact of Greco-Roman thinkers on Livingston and others who developed the U.S. Constitution. Students Joseph Perry, Elizabeth Thorsen and William Corman presented on Liberty Hall 360: Bringing the 18th Century to the 21st Through Virtual Reality, a comprehensive research project that included a virtual reality video reenactment of the wedding of Livingston’s daughter, Sarah, and founding father John Jay at Liberty Hall.

Their research is a part of MakeHistory@Kean: William Livingston’s World, a three-year project in which undergraduate students produce original research on Livingston, the first elected governor of New Jersey and builder of Kean’s Liberty Hall, by analyzing archival resources and original documents at Kean, Liberty Hall Museum and the Liberty Hall Academic Center.

“Being selected to present their original research at the flagship conference in the field of history, attended by thousands of professional historians from around the world, shows how Kean history students are taking advantage of the unique resources at Kean,” said Jonathan Mercantini, Ph.D., acting dean of the College of Liberal Arts. “It further shows that Kean's history program is among the very best in the region and nationally at giving students these world-class opportunities.” 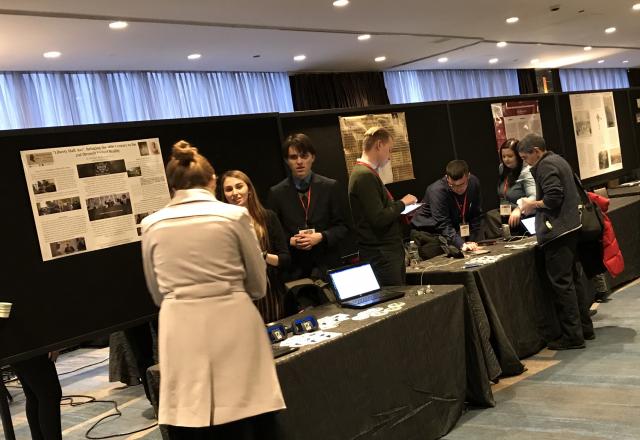 MakeHistory@Kean: William Livingston’s World is supported by a grant from the National Endowment for the Humanities, which was secured by Mercantini and Elizabeth Hyde, Ph.D., chair of the Department of History.

“Kean’s undergraduate history students are conducting research that is garnering attention at the highest levels within the field,” Hyde said. “At Kean, we give them access to a rich source of original materials for research and the guidance to develop novel ways of presenting their findings.”

Bretones, a senior who plans to teach high school history after graduation, said presenting before the oldest and largest society of historians and professors of history in the United States was a “wow” moment for him.

“It shows that Kean and the history department do an excellent job in preparing students for professional and other opportunities in the future,” he said.