Kean University celebrated the 2,825 undergraduates of its Class of 2022 today at a joyous Commencement, held at the Prudential Center in Newark for the first time since the start of the pandemic.

The day included a Commencement address by Tony-nominated Deaf actor Lauren Ridloff, who spoke in American Sign Language translated by an interpreter. She urged the graduates to embrace diversity and inclusion as they move into the next chapter of their lives.

“What I see right now at Kean University is diversity. I see inclusion. I see freedom,” Ridloff signed. “I see 3,000 agents of change.”

Ridloff, nominated for a Tony Award for her work in Broadway’s Children of a Lesser God and known for her work on The Walking Dead and Marvel’s The Eternals, was the first Deaf Commencement speaker in Kean’s history.

“Class of 2022, I know you have found your life pace. I encourage you to continue to run free,” Ridloff added.

During the past two years, Kean recognized Commencement with smaller ceremonies held on the University campus in Union due to the restrictions of COVID-19.

Today – and at Graduate Commencement held Tuesday at the New Jersey Performing Arts Center, also in Newark – the University tradition was back in full force. 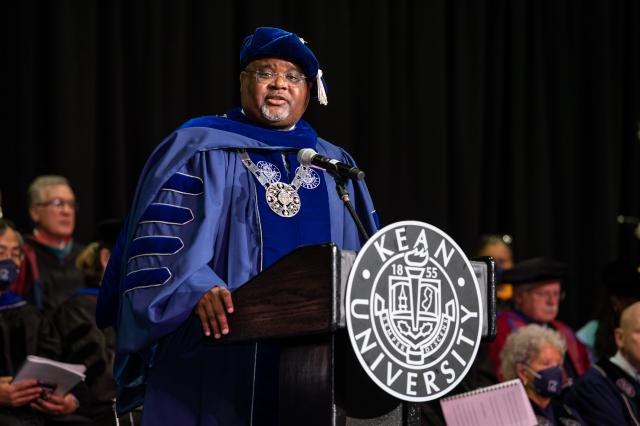 “This commencement ceremony looks very different from the ones we held last year and the year before,” Kean President Lamont O. Repollet, Ed.D., said. “How exciting it is to be back here at the Prudential Center for a universitywide ceremony!”

As thousands of proud family members and friends filled the stands, taking photos and cellphone videos and cheering for the students, the undergraduates entered the arena to the sounds of Pomp and Circumstance.

For the graduates, who reached the milestone after working through remote classes, mask mandates and socio-economic turmoil caused by the pandemic, Commencement was a moment of triumph.

“I am super proud of myself,” he said. “My years at Kean have been amazing. I felt nothing but support. I could not have asked for a more successful academic career.”

Stephanie Motachwa of Maplewood, who earned her Bachelor of Science degree in business management, had her husband, two adult children, nephew, best friend, and best friend's daughter cheering for her from the audience.

"I can't even put into words the feeling I feel," she said. "It took me more than 32 years to return to school. Today is the greatest feeling in the world for me," Motachwa said.

Following a welcome by Steve Fastook ’06H, chair of the University Board of Trustees, President Repollet gave his address to the graduates and their loved ones.

“You won’t find this lesson on any syllabus, but the strength and agility you gained over these years were as much a part of your learning experience as any of your classes,” he said. “Now, as you prepare to move beyond the borders of Kean’s tight-knit community, you have an opportunity to consider how the adversity you overcame has helped you to grow. More importantly, how you can use that strength to bring positivity and meaning to your world.

“Graduates, the choice is yours,” the president said. “Equipped with a degree that holds the power to open doors, it is up to you to decide which ones to walk through.”

Also included in the day, Kean presented honorary degrees to arts benefactors John Bauer, Ph.D., and his sister, Nancy Boucher. They have generously supported Kean’s Premiere Stages and the Bauer Boucher Theatre Center. Each was presented with the degree Doctor of Humane Letters.

Commencement 2022 also marked a milestone for the College Steps program, which provides peer mentors and other support to students with learning and social challenges such as learning disabilities, autism and executive functioning deficits. The first graduate of the program received her degree, a Bachelor of Science in exercise science.

“Graduates, go out and do fantastic things. Chase your dreams, be successful, and fail forward. Continue to make lasting impressions on your peers,” DeSanno said. “Smile lots, laugh often, and do not forget where you came from.”

The conferral of degrees gave each Kean graduate the chance to cross the stage, as each name was called out, to celebrate their achievement.

The ceremony concluded with a turn of the graduates' tassels and a cascade of confetti before students headed off to celebrate with their loved ones.

Celina Edwards of Magnolia in Camden County received her Bachelor of Science in cell and molecular biology. She plans to attend graduate school to be a physician assistant.

“I kind of want to cry a little bit,” she said. “It was a long way getting here, but I'm happy. I feel invigorated, ecstatic!”