The soaring exhibition features full-scale models of dozens of Leonardo da Vinci’s most inventive creations, from a diving suit to a catapult to a hang glider. Also on display are exquisite, artisan-crafted reproductions of the Mona Lisa and other da Vinci paintings, made with the same techniques da Vinci himself used, and hand-crafted reproductions of some of the 6,000 pages of notes he left behind. 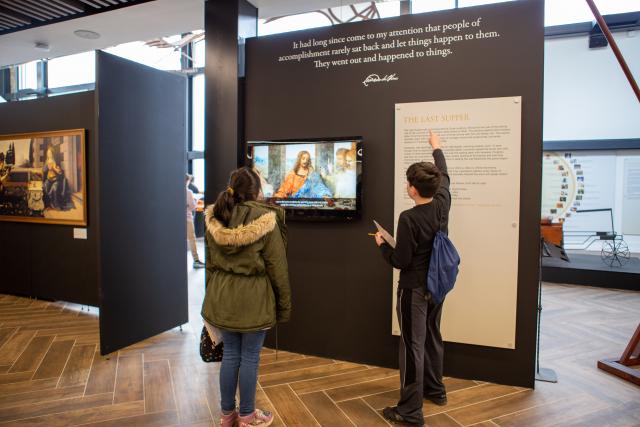 The exhibition is open every day until April 12, with special pricing offered on select days and free admission to school groups.

“I think it’s a great experience. It’s a really active experience for our students,” said Scotch Plains middle school teacher Carmela Lambert, while chaperoning a group of nearly 100 seventh-graders who visited the exhibition as part of their studies of Italian. “When we got the flier at our school, we thought it would be a great way to teach across curriculum.”

Da Vinci, a brilliant Renaissance artist and inventor, dreamed of inventions ranging from military equipment to a portable bridge and an ideal city. Most of his ideas remained drawings on paper. But recreations included in the exhibit, some of which are hands-on, bring his visions to life for a modern audience.

“You come here thinking he’s an artist, and you walk away thinking he’s an engineer; he’s a physicist. He was just a brilliant mind,” said Lynnette Zimmerman, executive director of the Liberty Hall Academic Center & Exhibition Hall.

The world-class traveling exhibition, which was created by Grande Exhibitions and has appeared around the world, also ushers in a new phase for Kean. 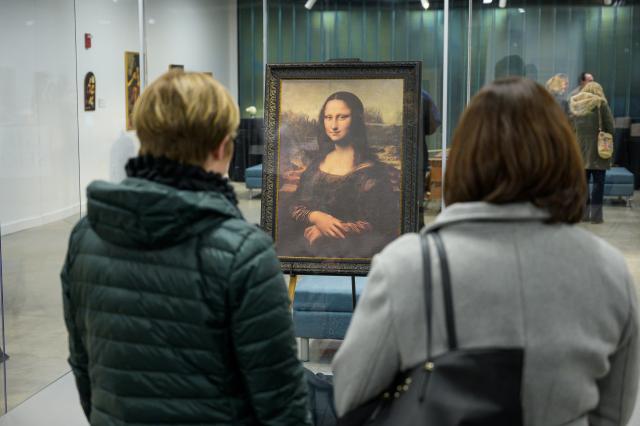 “It really creates a cultural center for Union County,” said Zimmerman, adding that special events, such as a social media influencer gathering, are being planned for the da Vinci exhibit. Other exhibitions will also be coming to the exhibition hall in the future, she said.

The exhibit was a lively hubbub of voices on a recent morning as teachers and students from Scotch Plains’ Park Middle School fanned out through the gallery. As part of their study of Italian culture, students were assigned to envision themselves as da Vinci’s students, and sketch his art and drawings.

“Do you want to look at my Mona Lisa?” asked seventh-grader Olivia DiSalvo, sharing the pencil drawing in her sketchbook with several teachers.

Teacher Angela Cammilleri said the students were impressed by da Vinci’s inventions of the diving suit and the ideal city.

Seventh-grader Mizuki Parker said it was “really cool how detailed his drawings are.”

Liberty Hall Academic Center & Exhibition Hall Program Coordinator Keyaira Boone ’14 said while the exhibition is wonderful for school groups, everyone is welcome to enjoy the exhibit.

“You don’t have to be a Kean alumnus or a student to see it; you can just come,” she said. “It’s fascinating for people of all ages.”

Special ticket prices are now being offered to Da Vinci -- Inventions. Children 12 and under are admitted free on Friday-Sunday, March 6-8; Wednesday, March 18; and Friday-Sunday, April 3-5.

In addition, two-for-$20 general admission tickets are available on Saturday, March 21, and Thursday-Sunday, April 9-12; and patrons are welcome to “pay what you wish” to enjoy the exhibition on Sunday, March 15.

Admission is free for school groups and for Kean University students with a valid ID.