Kean University’s genetic counseling program marked a milestone at today’s Commencement when the program’s first cohort of students graduated with their master’s degrees. All six students have jobs lined up in the growing medical field.

“The genetic counseling program we created here at Kean is just outstanding,” said Jill Fischer, the program’s director. “We have a diverse cohort and a very driven group of students. We have built a great foundation to grow and expand.”

“Kean educates students for demanding jobs in growing fields, and the success of the genetic counseling program and its students is proof of that,” said Kean President Lamont O. Repollet, Ed.D. “It also reflects Kean’s important role as a research university in New Jersey.” 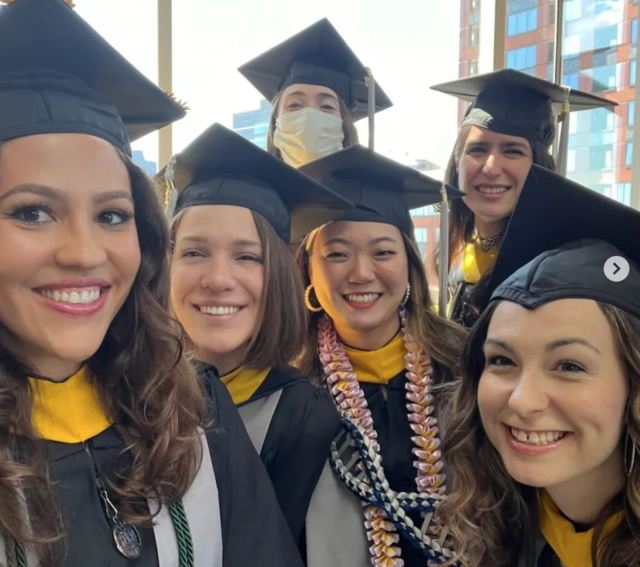 Among the graduates is Rebecca Kelly of Manorville, New York, who maintained a 4.0 GPA while at Kean. She will be a laboratory genetic counselor at the Mayo Clinic, specializing in conditions that impact blood cells.

The program’s first group of students helped launch an initiative called Diversity via Outreach, Networking and Education (DONE), at Kean and local high schools, to help diversify the field of genetic counseling.

“One of the things that really excited me about being at Kean was the diverse population. And I really wanted to work within the framework that we have here to promote diversity,” Fischer said. “They actually hit the ground running and did five events each semester.”

The thesis of student Esther Choi, A Pilot Study of a Student-Led Outreach Program to Increase Awareness and Knowledge of and Interest in Genetic Counseling in Minority High School Students, became the program’s pilot project. Choi, of Los Angeles, had the added honor of singing Kean’s Alma Mater at Graduate Commencement. She will be staying in New Jersey after graduation for a job at New Jersey Perinatal Associates, a high-risk pregnancy clinic.

“I came in very excited about the profession and genetic counseling, and I’m leaving with just as much, if not more, enthusiasm for the profession,” she said. “The program does a wonderful job of preparing students to join the workforce.”

Going forward, the program has plans to grow. There are eight students in the next cohort of students, with plans to expand to 10 students soon. The average class size for most genetic counseling programs is nine students because of limited clinical rotation sites. Fischer said the DONE program will also expand, and new research initiatives are being developed.

She said coming full circle with the first cohort of students has been emotional.

“This cohort is the fulfillment of the plan and of this program,” Fischer said. “To watch them go through the program and graduate and have them go off and be ambassadors for our program here at Kean, well, there are almost no words to describe it. I couldn't be prouder. And, I'm looking forward to being able to call them colleagues.”