Documentary on 9/11 Commission Premieres at Kean

The Human Rights Institute at Kean University commemorated the 21st anniversary of the 9/11 terror attacks with the world premiere of the documentary Are We Safer Today? which documents the bipartisan efforts of the 9/11 Commission to uncover the truth behind the attacks and offer recommendations to make the United States safer. 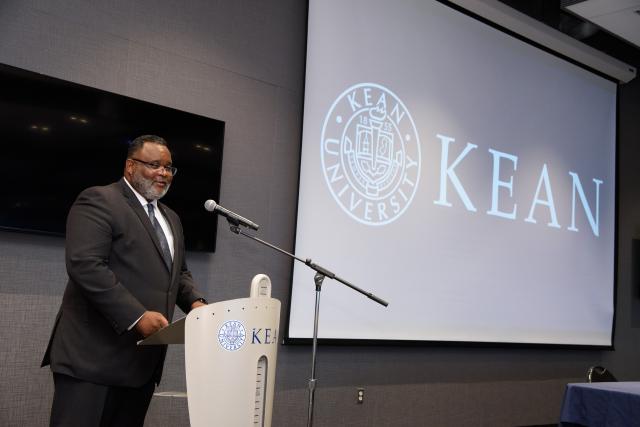 “This event not only serves to mark this historic milestone and commemorate the work of a commission that put the good of the country above partisanship,” said Kean President Lamont O. Repollet, Ed.D. “It also further strengthens the University’s commitment to educating our students and the greater community about the importance of civic engagement.”

“I'm proud of the fact that we came together as five Republicans and five Democrats and did something together for the country,” Kean said. “We've got to hope that we serve as a beacon, and people can look at what we did on this film and try to do it again.”

In the documentary, Kean said the commission was set up to fail due to a lack of time and funding, but the 10 commissioners discarded partisan politics and united around the goal of producing a fair and thorough report. Throughout their investigation, they had the full support of 9/11 families, who brought public pressure on Congress to create the commission and support its investigation.

After the film screening, Kean sat down for a conversation about the commission’s work with Sancha K. Gray, Ed.D., Kean University senior vice president for entrepreneurial education initiatives.

“The documentary so clearly outlines many things that we can go back and reflect on. You have underscored key tenets of what high-quality leadership should look like. We are so thankful that you were there and represented us so well,” Gray said to Kean during the event.

Are We Safer Today?, produced by Naptown Media in Indianapolis, was sponsored in part by Kean University.

“Many college students around the country and around the world weren’t born when 9/11 happened,” said Felice Vazquez, Kean senior vice president for planning. “It's a piece of history for them to hear about and learn about. So bringing this film to Kean University makes it that much more valuable for our students.”

The documentary’s executive producer, Bob Massie, said preserving the experiences of the 9/11 Commission was important for history.

“I wanted their story being told in their own voices, and so we got them together. We wanted to do this for people 100 years from now,” he said.

Dozens of students were in attendance. Chevon Williams, a Kean senior from Bayonne studying political science, said she learned a lot.

“I think it was a great opportunity for Kean University students to meet Governor Kean and see the work he did on the commission for the country,” she said. “We always talk about the beauty of when politics was still bipartisan, so getting to look at that was just so amazing.”

PHOTOS: Are We Safer Today?